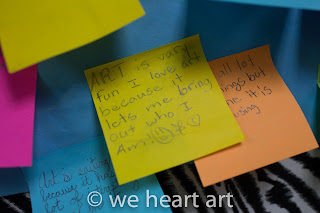 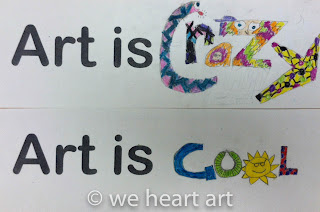 As I told you in my last post, I wanted to switch things up this year on the first day of Art in each grade level. My self-portrait idea was getting stale after 10 years!
I originally saw this idea on www.artabroad.blogspot.com and loved her "Art is...." statements her students made. Ironically, the post was also about having original teaching ideas and not just copying others' ideas. Ahem.

Well, I suppose you could say I'm imitating her idea and not copying?

It's time for all of us to start incorporating the Common Core Standards into our art lessons, too...so I wanted to start with this lesson this year. It made my students really THINK about what art actually is. We applied literacy and creative thought into these...a total WIN/WIN. 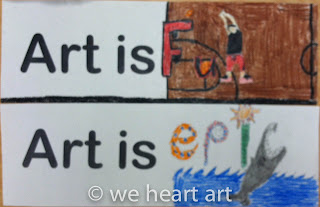 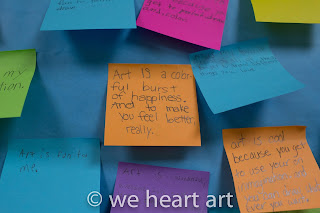 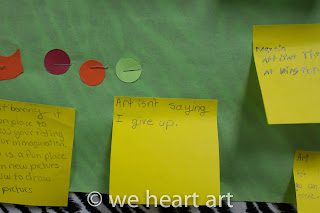 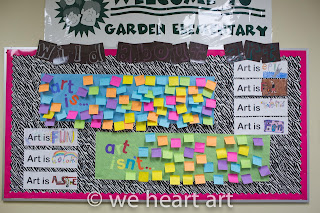 We were "word illustrators" for the day...discussing how important illustrations are to primary students to tell a story. We looked at different illustrators and pondered what books would be like without illustrations (which led to a conversation about chapter books and more colorful and descriptive language which create pictures in your head instead of visually...man, these kids can T.A.L.K!)

Anyway, students were to come up with ONE word that described what art was to THEM. There were so many words...colorful, creative, imaginative, fun, epic, awesome...
After they had their word down, they needed to illustrate that word. Colorful sure needed to LOOK colorful. Fun better look fun, and so on... 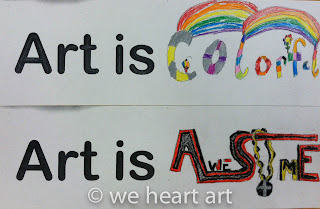 Getting them to think for themselves...using descriptive language...visually illustrating a thought or idea...defining words...HELLO, COMMON CORE. Having students apply an art project to another discipline...golden. 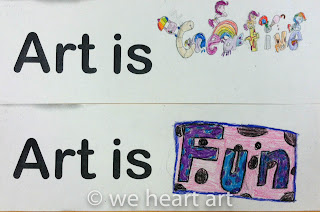 For this project, I simply used 11x17 paper and photocopied it with the words "Art is" on it. I sliced them in half and each student had their own. With discussion, direction, and production time it took about 70-75 minutes. (I have 55-minute classes, so about a class and a half).
At the end of the lesson, I read the kids the book "Art is" by Bob Raczka. I love the last line in the book "Art is how artists get you to think". 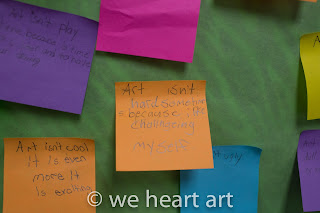 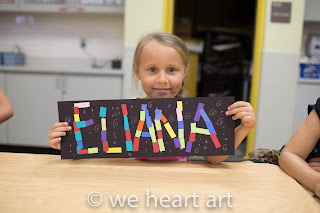 I have done the SAME project with my Kindergartners and first graders for 10 years (before and after self portraits)...I was ready to do something new! Also, it is becoming harder for me to remember all my Kindergartner's names, so alas the idea for this project was born!

We started off reading the book "Lines That Wiggle" by Candace Whitman. LOVE this book. I also love using our bodies to make lines (it's almost like dancing in Art!) after we read. It's a GREAT first day lesson for those squirrel-y K kids!

I had pre-written all my student's names in white crayon on 6"x18" pieces of black paper. I had little containers of cut scrap paper (approximately 1/2" x 1" but you could do square tiles or dots too!) on each table and had them use glue stick to trace the letters of their names and glue the mosaic pieces on. 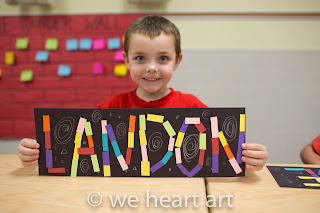 Because I hadn't done this project before and didn't time it correctly (AAAACK! Teacher's worst nightmare!) I quickly gave each of them a silver (!!!!!!!!) crayon and had them draw different lines and doodles from the book in the background. Clearly, spiral lines were the favorite! 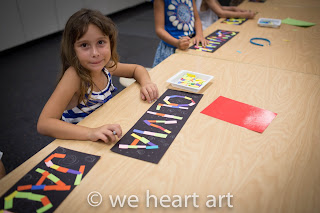 The project? Total success. My kids didn't feel afraid to draw (because we didn't! I've come to realize that my Kindergartners were SOOO afraid to draw on the first day, hence one of the reasons I wanted to switch up my lesson) and everyone came away with a successful, colorful art project.

And I'm starting to learn their names. WIN!
What do you do on the first day besides talk about rules and procedures?! 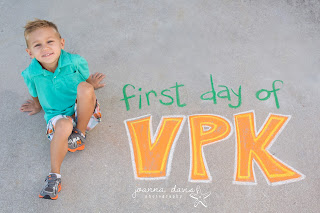 Forgive my absence for the last few months! I have been enjoying my kiddos and totally turned off blogging for a bit to recharge my batteries and brain...

After a nice summer with my two boys, I'm glad to get back into the classroom with my kiddos this week! My oldest son started VPK on Monday (Pre-Kindergarten) and is totally excited about the things he will learn this year (me too!) I am also excited that he is one year closer to coming to school with ME!

We have some exciting things planned this year and I'm glad to fire the 'ole blog back up and start posting again! Hope you all are having a wonderful beginning to your school year...let's make it the best yet!
Posted by Joanna Davis at 6:34 PM No comments: