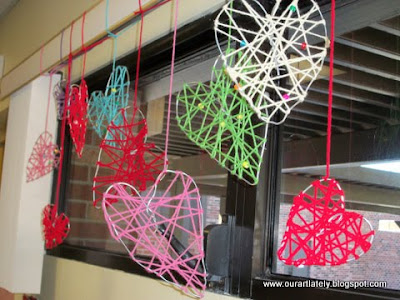 My Fourth graders are working on these beautiful heart-shaped "dream catchers" this week and I'm so giddy over them! We're using wire to form the heart (*they're using approximately 16" of wire each) and yarn to wrap and make the webbing. 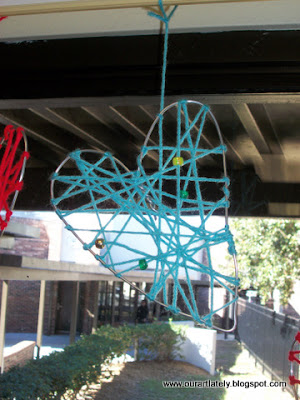 TO keep the yarn from slipping and sliding on the edges, they're wrapping the yarn AROUND the wire (once to the right of the yarn, and once to the left of the yarn) to keep it in place before criss-crossing it to another spot on the other side. They are able to use pony beads on their dream catcher if they desire. 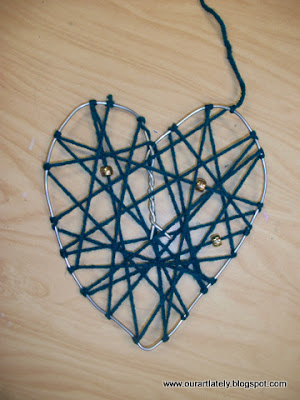 Here is a little closer view of a finished product. You can see the edges where they wound the yarn around the wire a couple times before criss-crossing to the other side.

*I had LOTS of disgruntled students during this project. Many heads banging on tables. Many kleenex-laden tables wiping tears away. Yes, a few projects became projectiles across the room in frustration. Their beef? The yarn was slipping on the edges and they just didn't understand how to wrap it a couple times before moving along. Once they got the hang of it, though, they felt silly about throwing tantrums.

**I should mention I have some of the most OCD students on the entire planet.

**I should also mention that said tantrums continued after I told them I wanted to hang them in my windows instead of allowing to take them home. Ahem. I'm so MEAN!
Posted by Joanna Davis at 8:43 AM