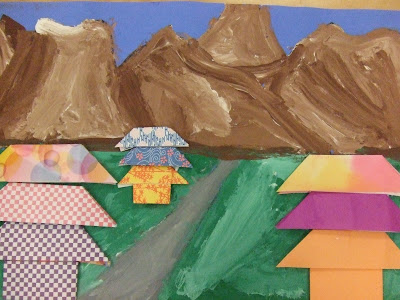 This is a project that is cultural, visually appealing, and FUN for fourth or fifth graders! It combines paint mixing (tints and shades) and ORIGAMI!

Just the word origami makes me shiver. It seems like that is all the kids ever want to do (sometimes I offer origami as a alternate activity when kids are finished with their work) and it is just sooo tedious! Of course you always have kids that "get it" and others that are twisting and turning their origami papers upside down and never do quite get the hang of it!

On day one we begin by painting the background. I teach the kids about tints and shade and have them mix colors to make "good looking" mountains. Same with the grass. A road will lead them through "town" and into the mountains. Since Mt. Fuji is a distinctive feature of the geography of Japan, we discuss why mountains might be important to include in our background. I do this on blue paper so we don't have to worry about painting in the sky, etc.

On day 2 I start by giving each child 2 pieces of 6"x6" origami paper. These will form the two largest houses in the foreground. I used the "origami house" tutorial in this link to make the two houses. I also gave them a smaller piece of origami paper (3"x3"---all of which is available at Sax) and had them make the smaller house (for the background).

This is a great time to talk about perspective (why the houses up closest toward you are biggest, and the house we just made and glued on for the background is smaller).

For the multiple rooftops I had the kids use origami papers with different patterns and colors on them. The origami pattern we used for this was the canoe. Obviously instead of puffing it out to make the canoe, we glued it shut and glued it on top of our houses. 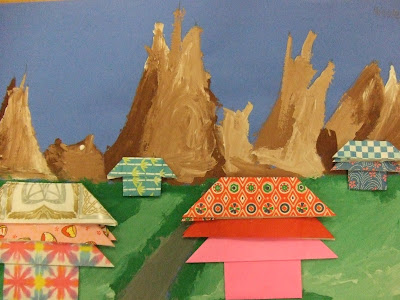 I told the kids they had to have a minimum of two rooftops on each house. If they had extra time they could make a second or third smaller house in the distance. 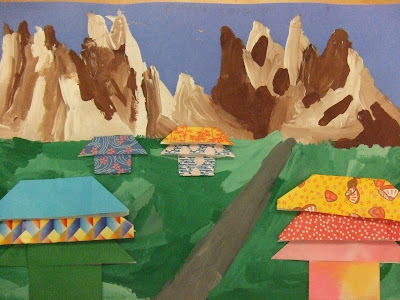 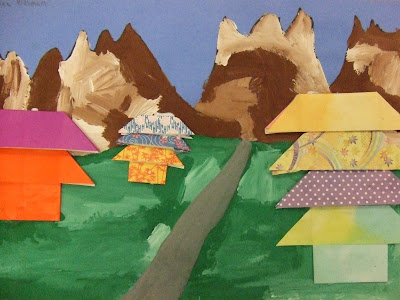 Of course you could use scraps of wrapping paper, thin computer paper, etc in place of the origami paper if you're budget is restrictive.

These are suuuuper duper cute and my kids had a wonderful time making them!