Inspired by Frank Stella's The Science of Laziness, I decided it was time to clean out that matboard stash I have in the corner of my room! Someone asked me to cut a mat for them a few weeks ago and I knocked over my box of pieces and parts that were BEGGING me to do something with them! 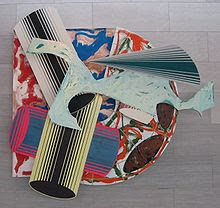 Frank Stella was an American Minimalist artist known for using shaped canvases. While some of his "pieces and parts" had different patterns, etc on them, I wanted to keep the colors simple and BOLD! 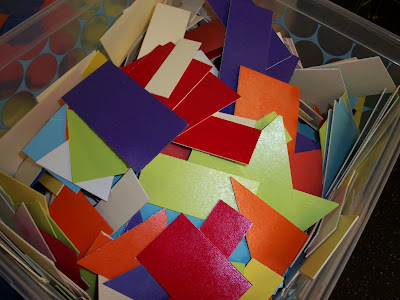 I took my largest pieces of matboard, flipped them over onto the backside (the white side) and spray-painted them bold colors. Trust me, it is easier this way! After they were dry, I took them to my cutting board and went to town. I chopped them up into about a million pieces (I figured each student would use 20 or so...you do the math!!) and put a variety of them in plastic bags on each table. DO NOT attempt to cut them all up into small pieces and then spray paint them. You will drive yourself nuts and your husband will curse you for having red, orange, and purple grass a month later! Not that I know or anything...
I gave each student a 6"x6" scrap piece of matboard which would be their "canvas". Of course some of these colored pieces would hang off of their canvases, which was the desired effect! 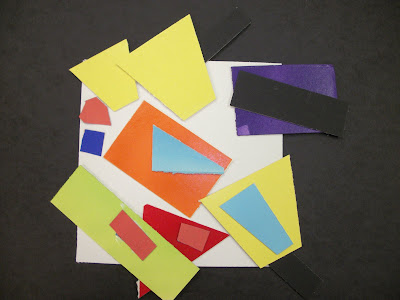 I also had small squares of posterboard cut up for the kids. I wanted them to be able to cut the posterboard into smaller pieces to add to their project in the negative areas. This also gave them some practice manipulating scissors to make geometric shapes. 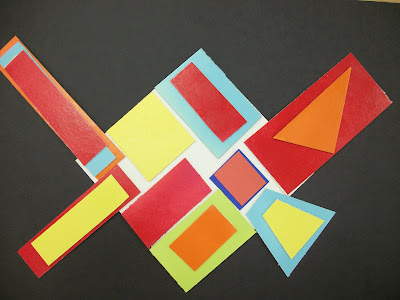 I did not initially put glue on the tables for them because I knew they would be quick to glue things on to rush. I wanted them to take their time, experimenting with different sizes, colors, and locations of their shapes. I wanted them to take creative license with their artwork and not make hasty decisions. After about 15 minutes while they created I finally put the glue on their table. 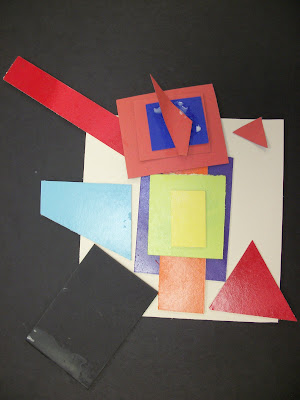 Some got really creative and used lots of shapes. Others had a hard time with the whole thing. I think it was the "containment" issue- they didn't want to go off the canvas! 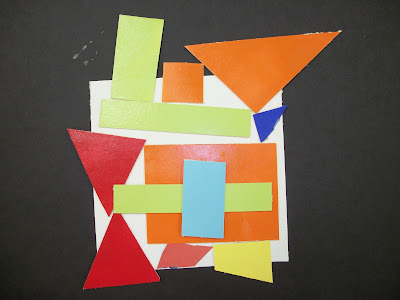 Either way, I love the way all the projects turned out! They're colorful, artistic, creative, and FUN! 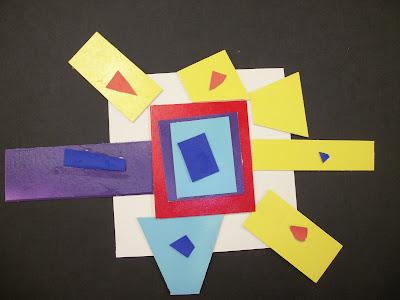 And thankfully, my matboard hoarding obsession has found new purpose!

Happy creating!
Posted by Joanna Davis at 5:09 AM